Home » Journal » Why is it so quiet around Steemit (STEEM)?
Journal

Why is it so quiet around Steemit (STEEM)?

Steem coin has been experiencing the typical destiny of your average alt in the current market. Looking at its monthly graph, we can notice a high forming around July 5th, when the coin broke $2 USD/30000 satoshi barriers. Ever since then we saw it slowly deteriorate in its BTC value, with USD varying slightly more. In a generally red day for alts, STEEM managed to reach its monthly lows on July 31st, when the price of one coin fell to the values of $1,19 USD/15806 satoshi. All in all, Steem lost almost 20% of its value during this month. The coin has recovered slightly since but has still recorded daily losses of 5,41% (USD value) and 0,23% (BTC value). Steem currently has a market cap of $345,637,208 USD which is just enough to have it placed on the 37th place of coinmarketcap’s list of most valuable cryptocurrencies. 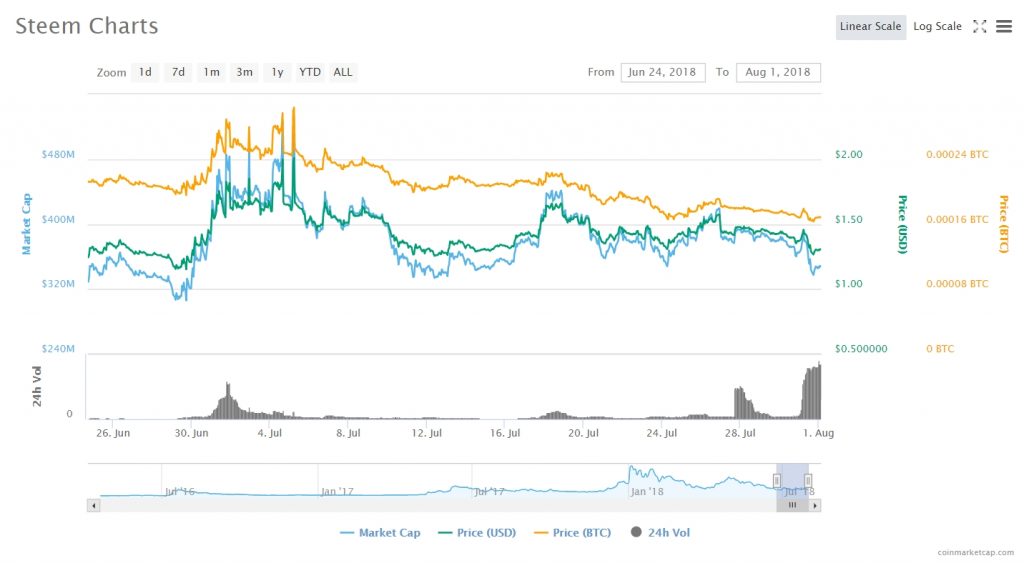 Steemit is a unique platform running on top of the Steem blockchain that was founded by Ned Scott and Dan Larimer, the man who later on gained a lot of fame (and infamy) for its work on projects like BitShares and EOS. This blockchain based social media platform lets content creators upload their content and then users get to read said content, rate it comment on it and even tip it if they feel it deserves it. The platform is completely decentralized, running on a network of nodes that power the Steem blockchain.

Steemit has a regular Dev Portal Update blog which they use to bring the latest developments about their platform closer to the users and investors. The latest update added several tutorials (18 of them to be exact), with 17 of those being Javascript and Ruby related. Steemit also improved their API definitions, added ImageHoster information, improved mobile support, and completed other minor tweaks which you can get a complete overview of here.

The team released another important update a couple of days before that as Steem Ruby became available of the network.

Steemit Applications team also has their own somewhat regular update section on the Steemit blog which they last used a couple of weeks ago to update us about the latest projects they are working on. Hivemind 1.0, improving sign-up approvals, improving developer tools like Jussi and Steem-Python were just some of the improvements that were made lately.

If you are a content creator/developer you have probably heard of steemit and its underlying coin. Alongside Bitshares, it remains one of the most popular blockchain based social networks out there. As it created one of the first successful blockchain applications in the real world, many platforms attempted to copy its “schtick” and create a similar product. For now steemit is the undisputed king of the niche; it remains to be seen if this will remain the case in the future.