Cardano hasn’t been covering itself in glory as of lately. July was a strange month for it, seeing it reach lows of $0,12 USD on July 13th and also seeing the coin’s BTC value fall below 2000 satoshi for the first time in a while. The coin did have a decent period after Coinbase announced its intention to look into adding Cardano as a part of its portfolio, which saw its values rise up to $0,1912 USD/2569 satoshi. This recovery was short lived, as the coin decided to end the month strongly in red. As of the moment of writing, one ADA is worth $0,120717 USD (8,41% drop in the last 24 hours)/ 1854 satoshi (0,70% drop in the same time frame). 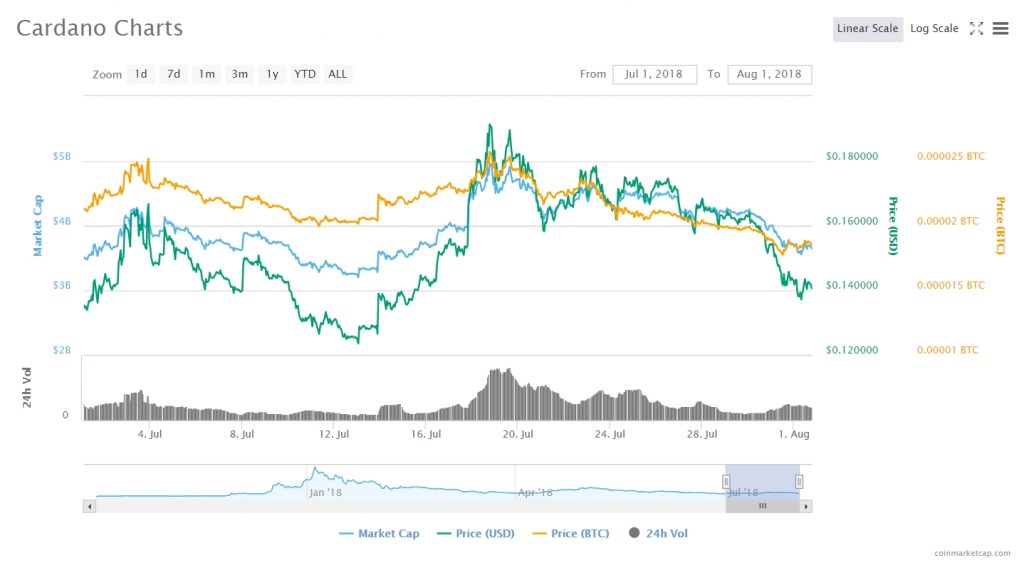 The coin is currently boasting one of the market highest daily trade volumes of 10,658 BTC, with Binance and the Korean exchange Upbit being responsible for about 70% of it. With a market cap of $3,648,368,513 USD, Cardano remains the 8th most valuable cryptocurrency on the market. OrcaBobby on TradingView had this to say about the technical elements of the coin:

“Global Bullish triangle with strong support level and 80% Fibonacci level. Events in the next 2 months. This is long-term investment with high profits. Gonna accumulate this token until target in 4000. Will sell and re-buy below major resistance levels. Bought at 1765. RSI oversold.”

While his take is optimistic, other traders feel that alts are yet to hit the proper lows, with some predicting most coins could easily lose another 40% of their current values. John Bollinger, the mane who created Bollinger Bands, said this yesterday:

“I get that you all are sanguine about the under-performance of the alts, but I am not; many are inches away from new lows.”

The biggest announcement that Cardano community was greeted with lately was the launch of the IELE smart contracts testnet. The team had this to say about the event:

“We are excited to announce the IOHK launch of the second Cardano testnet, which is for the IELE virtual machine (VM) and follows the recent launch of the KEVM testnet. The technology is not only an important step on the Cardano roadmap, but also for the industry – in offering robust and reliable financial infrastructure. Developers now have the opportunity to play around with the smart contracts technology that will eventually be offered as part of Cardano, and to provide their feedback, which we look forward to receiving over the coming months.”

You can always exchange your coins on Changelly (see if Changelly is legit place to trade crypto), instantly and directly to bitcoin

IELE is a virtual machine that will execute smart contracts on the Cardano blockchain. It has been developed by Runtime Verification in partnership with IOHK who provided funding for the project. The IELE VM has an underlying language and both are now in the process of being integrated into Cardano, with the ultimate goal of providing the Cardano blockchain with the ability to store and retrieve data. The network brings two important upgrades which Maximumkrypto from Reddit describes nicely:

“IELE contains two parts: a correct-by-construction VM designed using the K framework, and a correct by construction, Solidity-to-IELE compiler, also designed using the K framework. When you write your Solidity program and try to compile it using the Solidity-to-IELE compiler, it will catch many of the errors that previously would have been missed and that have caused many smart contracts to fail or be exploited.

In addition, as IELE development progresses, we plan to deliver ‘surface languages’ allowing programmers proficient in Javascript, Python and other languages to have an easy way to integrate smart contracts into their applications.”

Learn more and start developing on the IELE testnet here.

This event will definitely make more people aware of the Cardano project and widen its already solid developer base. The project continues to work on the Cardano 1.3 update, which should enhance the network even further and bring it closer to becoming a legitimate “Ethereum killer”. As for the price, it is very likely that its staying in the red until people regain trust in Bitcoin and crypto markets in general.