Why Do So Many ICOs Fail?

Back at the tail end of 2017, at the ETHWaterloo hackathon, Ethereum founder Vitalik Buterin (known for speaking his mind on various issues) dropped the following bombshell on a panel about decentralized technology:

Just recently, Amy Wan, the founder and CEO of Sagewise confirmed this notion by saying:

“In the U.S., more than 90 percent of startups “fail” their first year. There isn’t yet enough statistical data that ICO’s fail more often than startups that raise [funds] through more traditional means. One needs to define what failure means – does it mean failure to get traction and deliver the product, or failure to raise funds?” 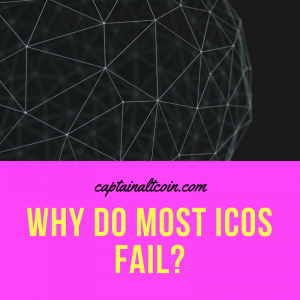 The general feeling around the industry is similar to what these two statements imply – many of the projects we see today will not be around in the near future. The questions on everyone’s minds are: why is this happening and why do so many ICO’s fail to deliver on their initial promises?

The answers are aplenty. Vitalik Buterin offers his own two cents on the issue, stating that many ERC20 token-based projects suffer from being overly centralized. While the Ethereum blockchain aka the base supporting the ERC20 tokens is decentralized, the tokens themselves are created and controlled by closed groups of developers that are backed by centralized interests and capitalists.

According to Buterin, we are currently going through the “token 1.0” stage of development. And while some flagship Dapps of the era like Etherdelta are experiencing massive commercial success already, the Ethereum blockchain is currently littered with bad ideas and even worse products.

“This, basically, is tokens 1.0. There are some good ideas, there are a lot of very bad ideas, and there’s a lot of very, very bad ideas, and quite a few scams as well. I expect that tokens 2.0 and the kinds of things that people will start building in 2018 and 2019 will generally be of substantially higher quality. Especially once we start seeing what the consequences of the first wave of tokens are in the medium-to-longer term… What is a good role for them and what is a role that doesn’t really make sense?“

Buterin added during a recent panel.

When the man who created the platform which hosts the bulk of the recent ICO explosion is quoted saying the above words, it’s clear that many companies are approaching the cryptocurrency world with wrong ideas and information. Ultimately, the list of reasons why many of these ICO’s fail can be summed up under 4 main points:

I’m sure you have browsed an ICO’s website more than once and suddenly started wondering “why did I have to tell my parents to buy me a PlayStation One instead of a programming book when I was 9?” The abundance of young people that will beam their smiles at you from across the screen is both an advantage and a big issue for this industry. While these kids grew up on a technology-based diet which made them into great developers they are today, the fact remains that most of them do lack real-world experience.

Ian Kane, Co-Founder of Ternio, recently weighed in on this issue:

“In my opinion, there are a few reasons ICOs fail, but it all boils down to lack of experience. These companies lack experience in a few categories:

1. The industry they are targeting – banking, shipping, real estate, etc.
2. Why blockchain is even needed for their use case.
3. How to effectively manage a business – hiring, finances, PR.
4. Post ICO communication – updates to their core community are critical.”

Mr. Kane sums it up pretty neatly. A team of 10 fresh-outta-college developers may have dreams of changing the world but they will struggle to deal with all the rigors of launching and running a business venture required to support an ICO. The best results are achieved when the ICO is backed by a company with a strong product that could benefit from a native cryptocurrency. For development teams that are starting from scratch, it is a good idea to hire an advisory board with experienced people; this will help guide their development efforts in the right direction. This new frontier being technology-based also removes the elements of direct human interaction; as a result, more often than not these people are unable to follow hunches and behavioral cues which might suggest that their partners are up to no-good. This lack of social experience can also cause ICO’s to fail.

Richard Nehrboss, the CEO of Shardix, thinks that most ICO teams ignore to perform proper market research and instead focus on technology. This can down even the best project out there and cause it to perform badly on the market.

Mr. Nehrboss recently said: “Over the last year, we have seen numerous ICOs introduce promising new technologies. However, many of these companies have lacked a coherent community interface. This stems from a pervasive mindset in the blockchain community which has been primarily focused on the technology side of development – build it and they will come. While these ICO’s are busy one-upping each other with increasingly outlandish tech, they don’t spend enough time gauging the needs and desires of the community – dialoguing with them in a way that will encourage further growth and word of mouth.”

This is indeed a big problem of the cryptocurrency industry as a whole. The term itself is tied to dark corners of the internet and shady “business” deals that many uniformed people don’t want to be a part of (the irony being that they’ll rather trust their money with a bank that robs them every time they try to move said money). Therefore it is difficult to find good marketing strategies for cryptocurrency when people’s mindsets probably aren’t ready for them just yet. The second part is true as well, since many major projects suffer from not having active PR teams or community managers who will collect feedback from customers.

Almost anyone is able to start their own cryptocurrency and launch an ICO these days. With development knowledge readily available, websites offering to create a currency for you and government regulations still not ready, the barriers to enter the crypto market have never been lower.

Joe DiPasquale, the CEO and co-founder of BitBull, came out with a following quote:

“Too many ICOs are launching without having a minimally viable product – or, in many cases, even a proof of concept. The simplicity of throwing together a website and launching an ERC20 token has led many projects to ICO even when failure is probable. Most other startups normally have a higher threshold of viability that must be achieved before a project can even think about seeking outside funding. This results in fewer of them failing as publicly as some of the more infamous ICOs have.”

Some commentators cite ICO’s as problematic sources of financing, since they allow unskilled investors and “everyday Joes” to invest. These people usually lack the investing experience that is present with venture capitalists and angel investors. Due to this, they will sometimes put their money into projects that any experienced and rational investor would stay away from.

ICO’s fall victim to their own success

Jeff Koyen, CEO of 360 Blockchain USA, has a great quote on what causes the downfall of crypto-related projects:

“Crypto is a victim of its own success. It’s one thing to read about some hotshot Stanford grad landing a $10 million Series A round on Sand Hill Road with nothing but a pitch deck and a wireframe. But if you know anything about running a startup, you know that $10 million is not ‘easy money.’ There’s a board of directors, equity dilution, maybe an overbearing VC with a hand on the wheel. Traditional capital comes with strings attached in the form of oversight.”

“While the vast majority of traditional startups fail as well, it’s particularly common with ICOs, as they simply aren’t prepared to bring their product to market.” Koyen continues, “It’s wonderful to raise money without sacrificing equity. Most ICO-funded founders still control their companies. They have advisors, not directors; they have token-holders, not cap tables. But without traditional accountability, founders and team members can lack discipline. In short, the money was too easy.”

This is certainly true in the world of crypto, maybe more so than in any other market. With funds seemingly pouring in from everywhere, people getting rich overnight and dreaming of Lambos, no government or any other players meddling to find out where you got the money and how you spent it, the “easy” money can cause the project behind an ICO to fail before it even began.

All of these failures are perhaps less important in the grand scheme of things. The main measurement of failure is usually how much people want to hold the tokens. Would you rather have a perfectly launched and organized token that no one wants to buy or a token that failed to deliver in some areas but is still sought after on the market? Failure is a part of growing up, and the general feeling is that the crypto market is still yet to go through the worst of the growing pains. It would only be fitting to end this article in the same manner we started it – with a quote from Vitalik himself explaining what the future holds:

“In general, when you have a new industry and you have this early stage 1.0 period, lots of people try different things, and lots of people try lots of things that just make no sense whatsoever. After some time, the market does mature … I personally do think it is coming but there is going to be a process involved in getting there.”

What is Binance Launchpad? – Dive Into Coins, Rules and ROI of Binance ICO Platform

The Death of the ICO and the Rise of the SAFT