What is Credo Coin (CREDO)?

The Credo Coin is the cryptocurrency used within the BitBounce platform.

The combination of currency and platform provides the developers with the ultimate protection against spam.

The developers understand that spam is a huge problem in today’s world because spam messages quite often attract our attention without giving us any real added value.

To prevent this problem, they have developed the Credo Coin, which in combination with the BitBounce spam solution is designed to provide effective protection.

Credo helps with the creation of an email market that allows users to charge a fee for receiving unknown emails.

If this fee is not paid, an unwanted e-mail will not reach the customer.

Who is behind the development of BitBounce and the Credo-Token?

BitBounce and Credo were founded by Stewart Dennis, who is also the CEO, and his wife Alexis Dennis, who is responsible for the design of the service.

Also, two investors are also playing a major role in the development of the cryptocurrency.

Tim Draper has invested through Draper Associates and was also involved in the foundation of the company. 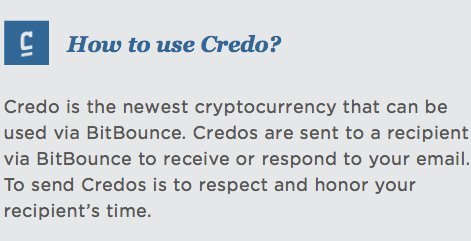 Also, two consultants are working for BitBounce. Cryrus Khajvandi is the first consultant and co-founder of Mobius.

What is the vision of Credo Coin’s developers?

The team’s vision is to ban spam messages from email traffic so that customers and companies will no longer have to focus on filtering important information in the spam inbox.

This goal is achieved by introducing fees if foreign addresses want to send e-mails to the personal mailbox.

The idea meets many supporters, the number of active users has risen to around 40,000 after 175 days.

Also, the developers expect further growth in the coming weeks.

What is the current market capitalization of Credo Coin?

The Credo Coin cryptocurrency is also traded under the name CREDO and currently has a market capitalization of USD 11 million.

The price per token is 0.021 USD. There are currently around 550 million tokens in circulation, the limit being 1.375 billion tokens.

This means that only 40 % of the total token quantity is currently in circulation.

The Initial Coin Offering, which took place on September 16th, was priced at USD 0.034 and had a market capitalization of $19 million.

However, the historical high was reached on 7 October.

The price per token was USD 0.757 on that day, and the market capitalization was USD 41 million. The previous lowest level, on the other hand, was recorded on October 2.

Also, the average daily trading volume is USD 16,000, which is why the cryptographic currency is not highly volatile. Trading takes place exclusively between CREDO and Ethereum.

You can’t buy it directly for fiat on any exchange. You can choose the most popular cryptocurrency exchange for your region and but BTC there, then trade it for CREDO on exchanges. Learn here how you can instantly convert altcoins to bitcoin and vice versa.