John McAfee has so far made a few crypto related predictions, most of which have come true. A prediction that is still left… hanging in the air is the one where he predicted BTC will reach 500 thousand dollars by the end of 2020. Accordingly, many people see him as a crypto visionary of sorts and his latest vision has left many bag holders ecstatic about the future of their coins. 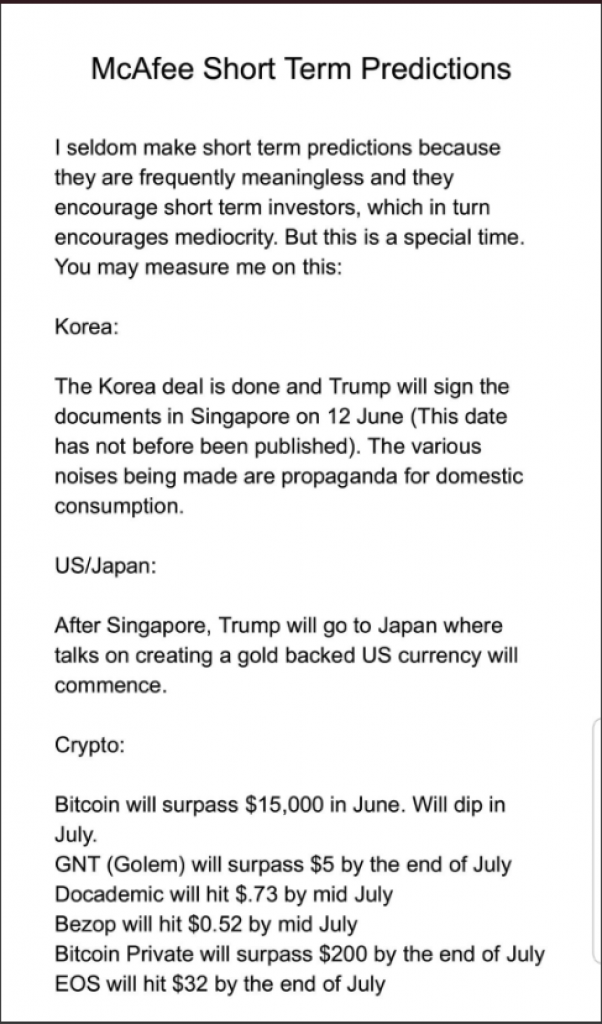 The prediction clearly didn’t focus solely on cryptocurrency, as McAfee touched on a couple of political and current world events-related questions. Among his crypto predictions, McAfee claimed that Golem (GNT) will reach the $5 mark by the end of July. Considering his disclaimer that he “seldom makes short term predictions”, these calls have even more weight to them and have made many question if they should enter a position in Golem. 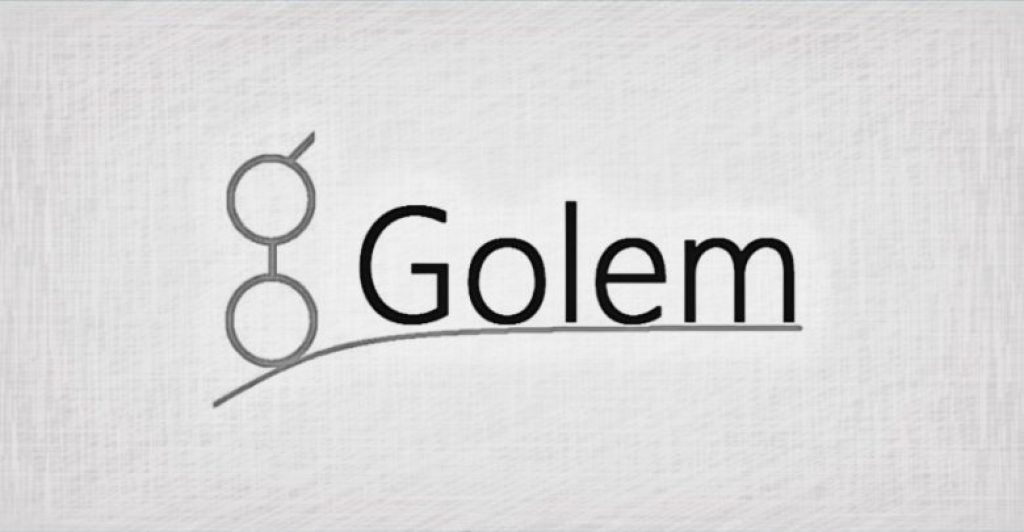 Golem is an interesting, new, Ethereum-based project that wants to create a global, open source, decentralized supercomputer that anyone, anywhere, anytime can access. The computer will be an interconnected network of user computers, from individual PC’s to massive data centers. Basically its power will be equal to the total power of the units which comprise it. The computing power is shared between the network participants, allowing anyone who joins in to take advantage of this massive pool or to contribute to it with their own resources. Simply put, Golem functions as an Air BnB of computing, allowing people to trade computing power and boost other peoples CPU and GPU capacities. Naturally, anyone who decides to provide its power to the network will be compensated for his resources with GNT tokens, either by the network or by the people using said resources.

Golem Network is a very valuable concept, especially when you consider its close relation to the blockchain technology. The decentralization of a public ledger enables Golem to remain independent, peer to peer service, without being in danger of its computing power becoming monopolized and centralized. It also has a massive first mover advantage in the fact that the rest of its competition functions on centralized principles, enabling Golem to annihilate them with its prices and power it can offer.

Golem is currently conducting a public trial of its platform. Titled Brass, this prototype presents an early, beta look into what Golem can potentially do. Currently its capacities are limited to CGI rendering. They wrote about why they decided to launch a trial version of their project while it’s still not up to its full capacity:

“Our decision is based on the fact that even though this new stage will expose our project to diverse risks, it is not possible (or responsible) to say a product is finalized without real users.”

Brass platform is currently in beta testing phase (0.15.0 version) and can be accessed via the Golem dApp. More information about Brass is available here. 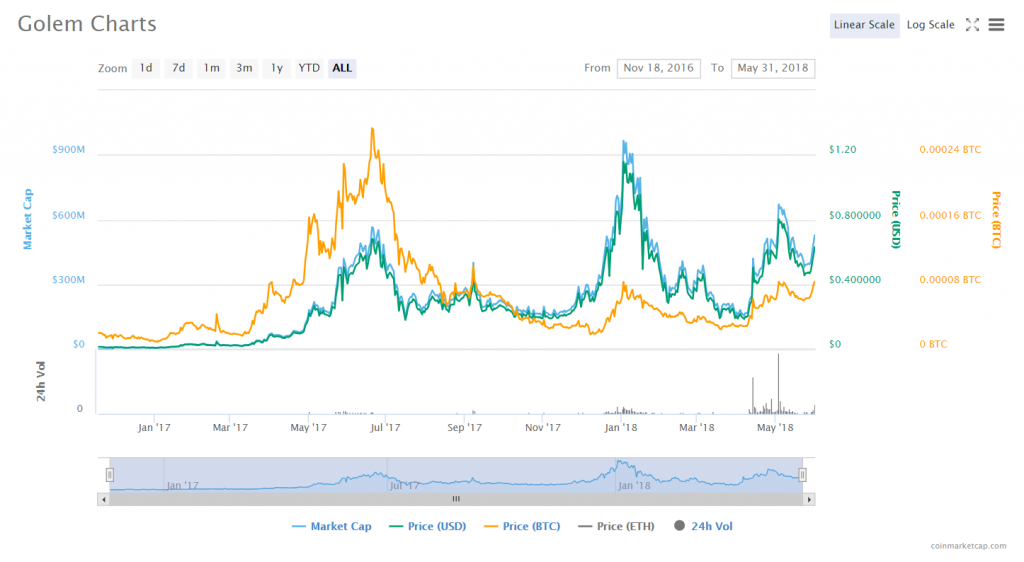 Looking at the Golem chart, we see a token that is currently way below its all-time high valuations. Currently trading at $0.62 (8241 sats), its value has room to grow to reach the heights it was on during the January market explosion. Still, even those heights are way off the $5 suggested by McAfee, so one must wonder if the coin can reach them in the short time-frame predicted. Even McAfee himself revised his Golem prediction a couple of days after his original announcement, saying it can go up to $3. A Reddit user Nbhaines posted the following analysis: 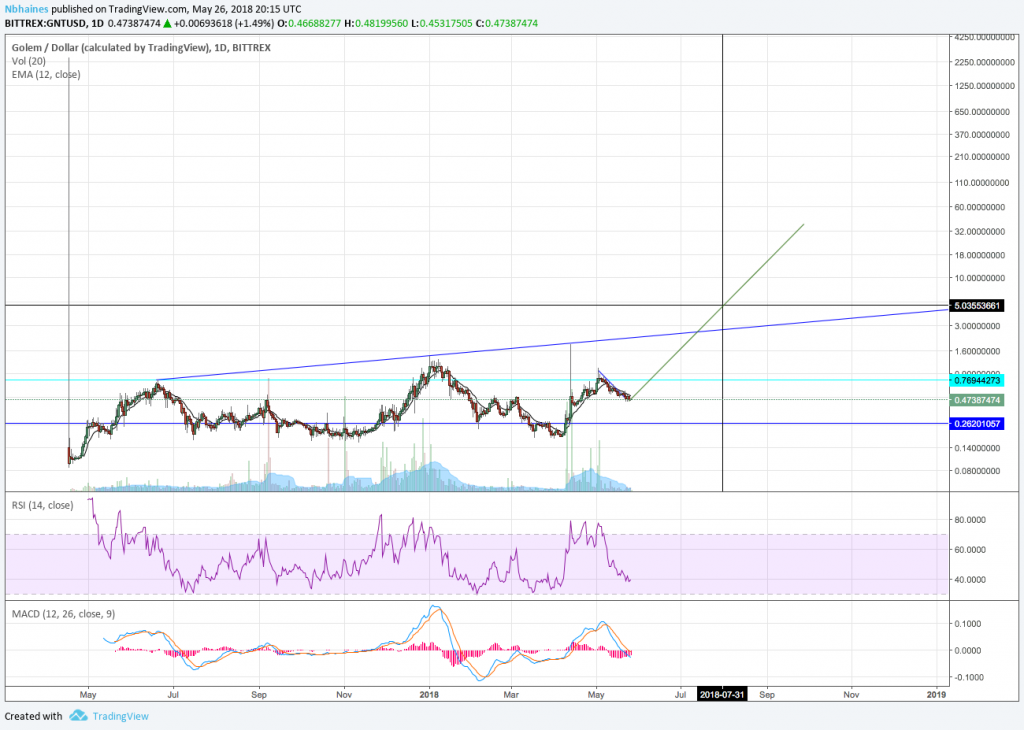 “Black vertical and horizontal are placed at 7/31/18 and about 5$. Obviously some key resistances along the way, especially the purple trend line I have pointed out before and the green line roughly shows the path we would have to follow for McAfee’s prediction. I hope he’s right but we’d need some seriously bullish news cycles to climb like that I think.”

The platform itself is impeccable, has a real life use case and can achieve a truly massive commercial adoption. The coin price rose in the days post McAfee’s announcement, going from 7244 satoshis to 9019 at one point. It is currently hovering around 8200, but a rising volume suggests that price breakout might be just around the corner. Look out for GNT as it just might do some good things in the near future.