The most famous altcoin in the world hasn’t been faring especially impressively during the last month or so, similarly to the rest of the market. Its USD value was somewhat more stable than its other key valuation, fluctuating from the lows of $409 USD to the highs of $511 USD (where it stood on July 18th). Currently the coin is valued at $464.94 USD, recording a drop of 0.29% in the last 24 hours. The BTC value was a different story, as it at one point fell from 0,0738 BTC to 0,0713 BTC (the price on July 17th). The coin since entered somewhat of a tailspin in its BTC valuation as its price is currently sitting at 0.05701180 BTC, which is a 1.78% drop in the last 24 hours. With a market cap of $47,443,382,974 USD, Ethereum remains the 2nd most valuable cryptocurrency in the world. 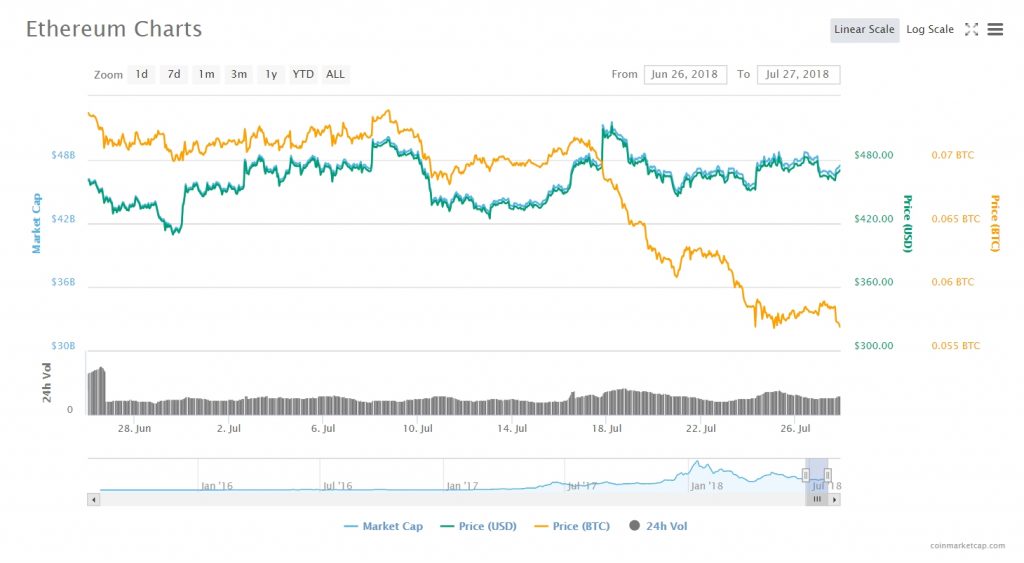 Traders currently see Ethereum catching support at the levels of $460, and a bullish breakout could see it drive up to values of $530-$620 (judging by the moving averages). Going below $460 will lead to a stronger support at $440, and going below that could see the coin set new yearly lows.

The original open source, smart contract-based platform for running dApps has been very busy as of lately. Besides the regular Ethereum Core developer meetings that are livestreamed on Youtube (last one was #43; check out its agenda here), a full list of Ethereum related updates has been released on weekinethereum. The list is truly extensive and includes data about the protocol development, Ethereum-based project development updates, latest software releases, mainnet and exosystem upgrades, governance and standards improvements and various interviews, podcasts, videos and talks. The most interesting update has been the publication of Plasma Cash Primer article, which should help anyone interested understand how exactly the long-awaited Plasma integration might function.

The upcoming month will be a populated one as well, with the project looking to organize several hackathlons and workshops in India, England and Norway. More importantly, ticket sales for the famous Devcon, annual Ethereum “family reunion”, are about to commence in 11 days. The event will be held in Prague Congress Centre in Prague, CZ and will last from Oct. 30th to Nov. 2nd. Ethereum Foundation hosts Devcon to educate people about Ethereum protocols, tools, and culture and give them an ability to build decentralized applications that the whole world could use. The event is expected to be visited by many designers, UX researchers, smart contract devs, blockchain researchers, client implementers, test engineers, infrastructure operators, community organizers, and even artists. Notice that there will be a lack of investors here, as the organizers don’t want to dilute the event by having people focus on finances and investing.

Read here how to buy Ethereum.

A peculiar issue struck the network just a couple of days ago, when Google Chrome removed the MetaMask app from its Play Store. The removal was accidental as it later turned out and lasted for about 6 hours before it was restored. The developers of the app were left scratching their heads, as Google never delivered any official warning or announcement on why MetaMask was being removed. It also left ETH and ERC-20 token holders in danger, as several phishing apps were live on the Play Store at the time and scammers started spamming social networks with fake MetaMask links. Brave & BAT, Augur, MyCrypto, IDEX, and several other people and organizations helped deliver the news of the app being down to the general crypto public, this limiting the potential negative impact this removal could have. As of now, the main MetaMask app can be downloaded from the store and additionally, the most popular lookalike app has been removed.

As of now, Ethereum seems focused on development and delivering important updates to its core protocol as well as specific updates related to the projects built on top of the core. The long awaited Plasma integration will be the one update that most of the community expects, and we will see if the scaling improvements it promises are able to elevate Ethereum to the next level.