Deadcoins.com and Coinopsy.com are the most famous crypto crypt keepers out there. The reasons why these once thriving and hyped up currencies suddenly cease to exist are truly diverse. From getting abandoned by the miners, developers and the general community, over coins turning out to be jokes/scams, to technological hiccups or simple drops of interest and volume, a lot of diseases have struck down even the mightiest of projects that once freely roamed the crypto-scape.

Once multimillion dollar beasts like Bitconnect, Davor and many others are now resting peacefully on the pages of these websites, reminding hyped up and always positive crypto investors that things can and will go wrong with their projects. All in all, Coinopsy currently lists 245 total dead coins, while Deadcoins.com boasts an army of 829 coin souls that are haunting the markets in search of a final resting place.

Wonder what is the best wallet for ethereum? Click here to find out.

That comparison perhaps isn’t even that farfetched, as some of these thought-to-be-dead coins show signs of life from time to time. For example, it can be quite an eerie feeling looking at Bitconnect trading pick up from time to time. Not by much, but it still does. And it immediately makes you wonder how is this possible when the platform founders so clumsily exit-scammed everyone, in a way that would make Raskolnikov look at the entire ordeal and say “well that wasn’t very smooth, was it?” 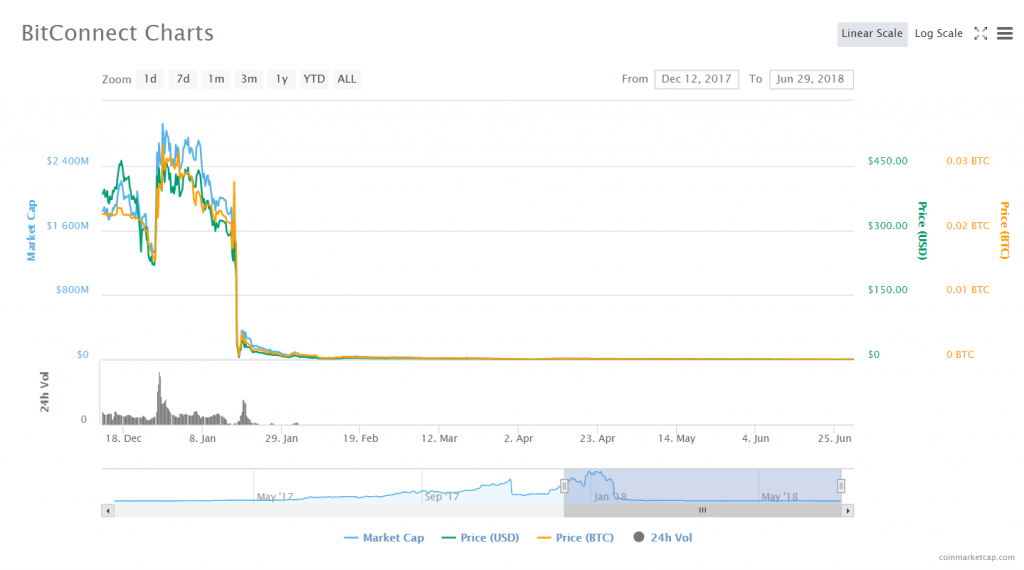 If you stare at it long enough, some say you’ll hear a faint BITCONEEEEEEEEECT in the distance

The graphs that end up flatlining like the one above stand to show how quickly our hopes and dreams of getting rich can evaporate, if we attempt to achieve them through dubious and risky businesses. And crypto is definitely one such business. The rate of failure in this world is quite astounding; some estimates say that around 60-80% of total crypto projects never see the light of an exchange. Most of the ones that fail in this group will either be joke projects, or will be poorly thought out scams, or legitimate projects that no one is interested in.

From the 20% that manage to get their idea off the ground, it is presumed that about half will fail shortly after they start working on their projects. This will happen either due to mismanagement of funds/development, bad luck or due to the idea simply not being a good one. The remaining 10% might launch actual platforms, but most of those will probably fail as well. Experts agree that maybe 5% of the projects currently present on the coinmarketcap’s list of currencies will live long enough to see the year of 2023.

An analysis by an ICO advisory company called Satis Group confirmed that merely 4% of ICO’s that collected between 50 and 100 million USD ended up “successful and promising”. Most ICO’s raised money on nothing but a whitepaper full of promises and desires to change the world. Sadly, you can’t produce a functional blockchain only on that.

Investors feel this as well, and their reluctance to support empty words can be seen when we compare crypto companies with other tech companies. According to a report by CB Insights from October of 2017, 28% crypto companies that received initial VC funding went on to organize a second, public round. At the same time, tech companies in same position achieved a second finance round launch rate of 46%. A look further reveals an even bleaker picture, as 14% of those tech startups reached the 4th round of financing. Only 2% of blockchain companies managed to do the same.

And if there is anything positive about a world plagued with deaths, it’s the fact that the undertaker’s business starts blossoming. Mentioned websites like deadcoins.com and coinopsy.com are currently at the forefront of the crypto “death market,” looking to bag and tag the deceased projects. Naturally, plenty of graves will draw out grave diggers that look to loot the graves of the dead and save what can be saved. Perhaps a bit morbid comparison, but a fitting one nonetheless. One such project is CoinJanitor, who recently partnered with Deadcoins in an attempt to recycle failed coins whose market caps fell below 50 thousand dollars. Naturally, the project plans on creating its own blockchain from these recycled ones, seemingly creating a bonafide Frankenstein of the crypto world.

They say how death and taxes are the only two things you can’t avoid in life. So far, crypto has successfully eluded the second part of this equation. Death, on the other hand, has proven to be a bit harder to evad-I mean miss, as projects are getting sent to the glue factory with an alarming regularity. This probably won’t change anytime soon, since the cryptosphere looks poised to remain a very fertile ground for scammy, badly thought through or plainly bad startups.