BAT token has been performing somewhat decently after the market got a hold of the news that Coinbase is considering this token as a potential addition to its portfolio. Carried by the announcement the token’s BTC value started fluctuating wildly, reaching values of over 5000 satoshi before experiencing a strong pullback which was the price drop to just above 4100 satoshi. USD value remained relatively stable throughout this. 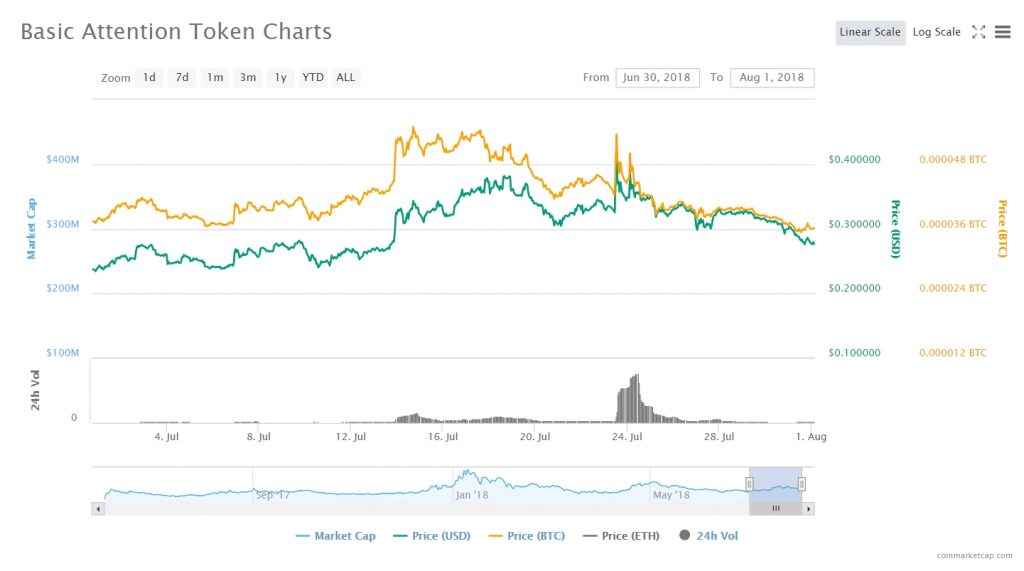 After a short period of sideways movement BAT exploded slightly on July 23rd, going back up to a monthly high of 5477 satoshi. Ever since we saw the token slowly losing its BTC value, before a somewhat sharper drop saw it fall to the lows of 3529 satoshi. The USD value followed suit after the second pump as it also reached some significant lows. The token is currently valued at $0.266833 USD (3.59% drop in the last 24 hours)/3506 satoshi (2.18% drop in that same time frame). With a market cap of $265,832,522 USD BAT managed to drop out of the top 40 most valuable cryptocurrencies in the world and is currently holding the spot no.41 on that list.

To quote stephenskyle30 from TradingView:

“…the RSI has fallen below 50 and the EMA is looking bearish. On the flip side, fundamentally and structurally BAT/BTC actually looks like it has potential too me. You can see that on the daily chart we have formed this wedge. Bouncing between the high and the low points. This has been a trend that has been confirmed a few times. Additionally, the Coinbase announcement with BAT could potentially increase volume (I know this is not a done deal yet but it is a good sign).“

BAT project has been mostly dedicated to community activities, with a couple of development updates here and there. Probably the biggest development update was the confirmation of the Brave browser and MetaMask integration. Their cooperation went a while back, as Brave was the first desktop web browser to start suggesting MetaMask to its users upon them visiting any Web3 site. MetaMask is an account manager for Web3 applications like CryptoKitties or other Ethereum dApps and now it comes pre-installed with the Brave browser. Check out Brave’s official blog post on the partnership for more details.

Kraken is top 10 exchange for the last 3 years which lead us to write our Kraken exchange review.

Brave developers were among the key guests and speakers during this year’s edition of Distributed, an event that is dedicated to “unlocking the global power of decentralized business”. They had several panels and discussions which they attended and spoke on. A Telegram group was created for Chinese-speaking members of the community. BAT community managers are holding merch giveaways that are bound to attract more people to the platform. Finally, Doc Searls, editor at LinuxJournal conducted a small research between Amazon pricing of goods that you purchase either via Brave or Chrome browser. He determined that people could save up to $6 USD for a single 30 USD project if they were to use Brave instead of Chrome.

As always, BAT remains a solid token behind a genuine real world project. If only the price started reflecting its potential.