After that massive dump we saw at the turn of the month, Tezos has been fairing somewhat okay. At its monthly low, the coin was worth $1,22 USD/18762 satoshi. These numbers were only temporary as the coin saw a decent bounce in the days post reaching the mentioned low. Ultimately we saw Tezos reach monthly highs of $2,52 USD/37493 satoshi before embarking on a dull period of consolidation and slow bleeding. The coin has fallen considerably from the recovery price, reaching $1,78 USD (a drop of 6,99% in the last 24 hours)/24129 satoshi (a drop of 4,02% in the same time frame). Currently sitting at a market cap of $1,081,548,578 USD, Tezos is the world’s 19th most valuable cryptocurrency at the moment. 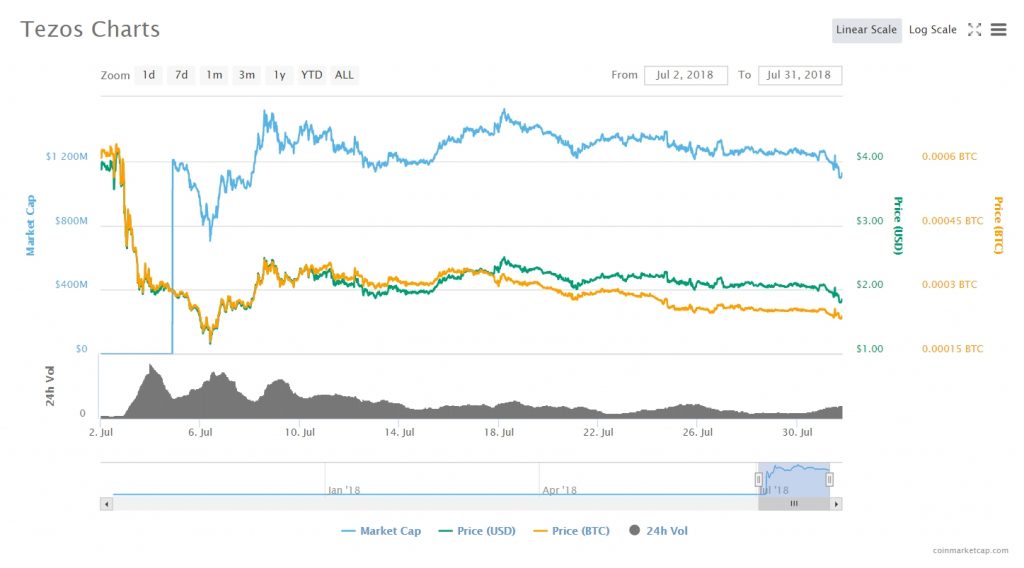 After launching its genesis block on June 30th, Tezos betanet has been slowly picking up the pace ever since. The Tezos Genesis Block issued roughly 608M XTZ, or tezzies, to roughly 32,000 accounts. Tezos protocol predicts that there will be 10 billion XTZ coins on the network, with the remaining 9,3 billion being released over time through inflation. 50% of the value in the Tezos network, at genesis, was held by 156 accounts, or less than half a percent of the population. 90% of the value was held by about 6,000 accounts, or 20% of the population. This suggests that Tezos network suffers from wealth inequality, meaning that the network is rather centralized.

Here is our list of best BTC hardware wallets.

This can become an issue with DPoS networks like Tezos. Of over 600 million issued tokens, only 220 million are delegated to participate in making the network consensus (out of that, 100 million belongs to the Tezos Foundation), while the rest are held by the owners. Such a coin distribution creates a centralized network where certain individuals have much more power than they should be allowed to have. All sorts of security issues arise from this, but they can be solved by increased decentralization. The main network issue right now is motivating holders to start delegating their coins and turning them into active network contributors; this write-up from Meltem Demirors goes into detail about the issue and how to fix it and is a recommended read if you want to know more about the topic.

Speaking of Tezos and its consensus mechanism, Jacob Arluck recently released a piece which described why Tezos’ DPoS is actually different from the ones employed by projects like EOS, Bitshares, Lisk, Tron etc. He writes about what he calls a Liquid Proof of Stake that is employed by Tezos:

“To conclude, the two models stem from different design priorities: 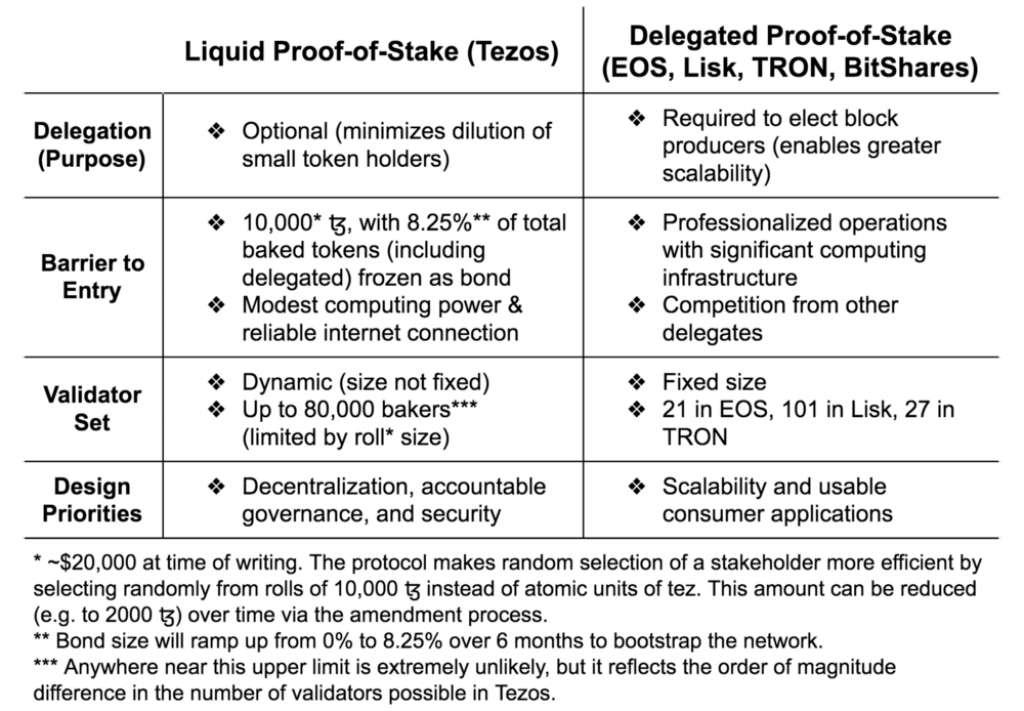 Check out his full thoughts in this twitter thread and the accompanying article. The article goes in depth about Tezos baking, which is basically what the network decided to call its block verification process. You can read more about what exactly baking is either in his article or in this summary.

In the meantime, Tezos foundation named PwC Switzerland as the external auditor of their finances and operations.

“PricewaterhouseCoopers (“PwC”) is a global leader in professional services, offering auditing, accounting, legal, tax, and other capabilities. PwC is among the most respected accounting firms in the world, with extensive experience auditing complex operations in a wide variety of environments globally,” says the official announcement of the partnership. Having PwC as its auditor should shroud Tezos in an air of legitimacy as this company is one of the Big Four auditors, along with Deloitte, EY and KPMG. It is also the second largest professional services firm in the world.

In other updates, Tezos had a couple of meet-ups where fans, holders and developers got a chance to share their thoughts on the project and the cryptosphere in general. One was held on the premises of the Technical University Munich from Munich and the other one took place in Boston. As of now it seems like the project and its developers managed to handle what was a truly impressive drop of value (one that happened after the XTZ tokens became liquid). As for the future, the holders will surely look towards the upcoming mainnet launch and hope that it brings a stronger recovery of their token.