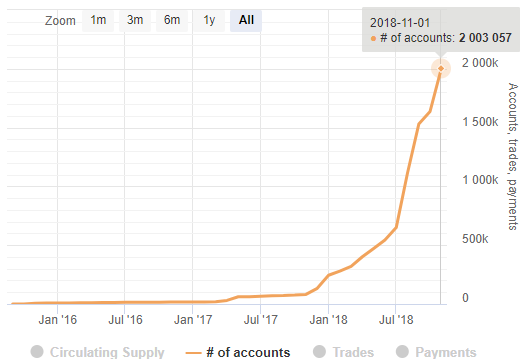 As you would expect, this achievement is celebrated in the community as an evidence of XLM adoption. However, that is a debatable subject matter as more accounts doesn’t mean more users. However, some correlation does exist.

For example, bitcoin has 22 million addresses and the number keeps growing which is also breeding heated discussions if the increased number of addresses means bitcoin is used more.

There is correlation between number of users and number of times these users use the network and active addresses. Remember it costs money to make a transaction, so nobody is incentivized to just make random transactions to inflate an abstract metric. It’s most likely more users using the network more.

If the network was free to use the argument could be made that someone is just testing or inflating numbers for speculative purposes, but it’s not the case here. Same reasoning applies to Stellar network and its accounts.

Stellar won position number 4 from the troubling Bitcoin Cash for a short period of time, as BCH was one of the biggest losers of this November bear market. XLM is back on position number 5 right now with only $15 million difference in market cap between the two projects. Considering that BCH is still struggling with its younger brother BSV trying to kill him, Stellar should be able to firmly take over the 4th position from them.

The Stellar Development Foundation has announced that it is currently in the final phases of preparing the release of their own decentralized trading platform (SDEX).

The Stellar Decentralized Exchange is rumored to be launched sometime next month. SDF has revealed that with the exchange launch, there will be changes to the core protocol of the Stellar network.

SDEX will be the world-class front-end that our underlying technology has long deserved. It will enable on-chain, protocol-level trades for any Stellar token, and Stellar will create liquidity to minimize spreads and maximize choice of assets.

As the list of coins listed on Coinbase is getting longer, time is ripe for XLM to join the elite company on the world’s largest exchange. Here are couple of reasons that speak in favor of XLM listing:

Coinbase has close business ties with Circle – investment app that offers cryptocurrency as a buying option. One of the coins offered in Circle is XLM which prompted XLM holders to see this as the advantage for Stellar to be the next Coinbase listing. The reasoning is solid – if it is already on Circle and Circle works closely with Coinbase, it is very plausible for the XLM coin to be added to the Coinbase exchange.

Based on what Coinbase have put out in their public releases about requirements to be listed on the platform, I’d say Stellar ticks the boxes. For a coin to enter Coinbase, it needs to meet the criteria in the digital asset framework released last year. The quality of the project is part of the criteria along with liquidity, legal compliance, token economy.

And third, a member of the Stellar board is the president of Y Combinator. Y Combinator owns 7% of Coinbase. That member is of course Samuel H. “Sam” Altman.