Home » Journal » Is it a good idea to be long on Waves (WAVES) coin?
Journal

Is it a good idea to be long on Waves (WAVES) coin?

Waves fared like your average altcoin throughout the month of July. It experienced its monthly highs in early July, when its BTC price peaked at 47850 satoshi. The USD value saw its climax later on July 18th, when the coin peaked at $3,27 USD. Since then WAVES kept slowly petering off throughout the rest of the month, and this price slide continued into the month of August. Waves coin is currently priced at $1.88 USD (a drop of 2.31% in the last 24 hours)/25030 satoshi (a drop of 1,78% in the last 24 hours). Waves is currently valued at $187,044,195 USD which is just enough to keep the coin placed as the 49th most valuable cryptocurrency on the market. It currently has a minuscule trading volume of 766,73 BTC, of which more than 90% is being exchanged on the Waves DEX and Binance. 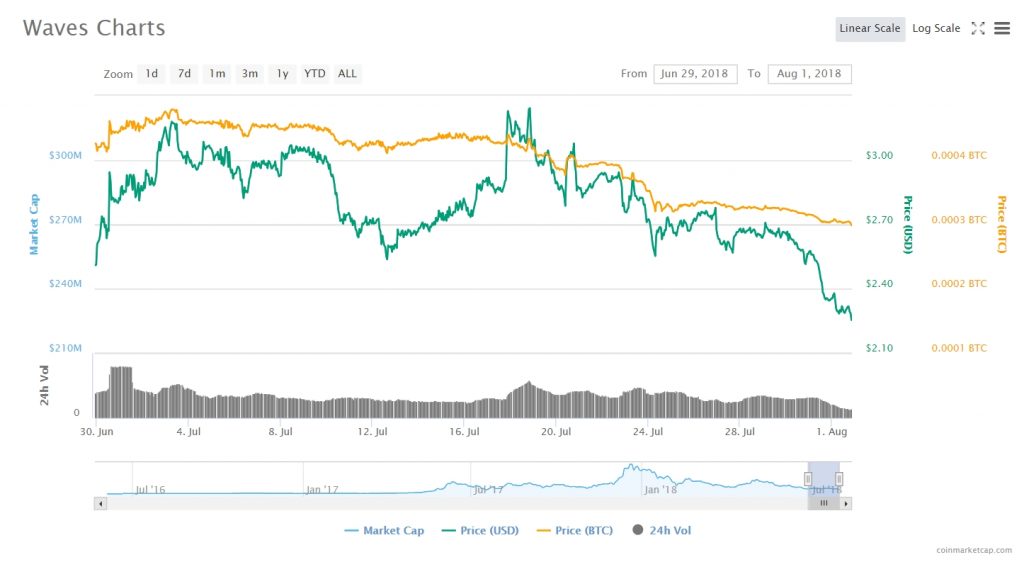 Waves, the project founded in 2016 by Alexander Ivanov, held the second biggest crowdsale in blockchain history which managed to collect 29634 Bitcoin at the time. Over 20 thousand of those are apparently still owned by the Waves company and will be invested into further project development.

And development is indeed on the way, as Waves recently announced that their client is finally out of beta testing, meaning that the official 1.0 version has been made available to the public.

The Waves beta client was live since December of 2017 and has seen 53 updates before the current 1.0 version was released. The client will have several useful features, including a Token Launcher (for issuing custom tokens), Waves Wallet (for storing your crypto/fiat currency), an Asset Manager (a new feature that makes it possible to search, pin, and unpin tokens on the main page) and a fully operational Waves DEX.

The platform is a token exchange which facilitates the process of sending, exchanging, and storing tokens. They recently announced a backlog of educational videos which their developers created in order to explain how the Waves platform works. The videos show you how to create, deploy and use Waves smart contracts, how to implement multisignature technology and how to use the Waves escrow; you can watch them all and learn about the platform in detail here.

Just after their client 1.0 went live, the platform announced their intention to start adding ERC 20 tokens to their portfolio. Waves is currently in the process of adding gateways for said ERC 20 tokens to make their addition to its ecosystem possible, and as a direct result popular Ethereum tokens like ZIL and GNT will (sometime in the future) be tradable on the platform. For now, there is a vote that is meant to decide which tokens will be added; check out the team’s official announcement for details on how to take a part in this vote.

In other news, Russia’s National Settlement Depository (NSD), the central depository for the Moscow Exchange, announced its intention to develop a blockchain platform to provide deposit and settlement services for digital assets. The platform will be built in partnership with Waves and its founder Sasha Ivanov, as per this Forbes report. This extends the Russian “collusion” of the Waves platform which previously signed an MOU with Sberbank and its cybersecurity division BI.ZONE, in an effort to make the Waves and its friendly project Vostok safer.

While Waves is making all the right waves at the moment, some tend to point out Sasha Ivanov’s past with the companies Coinomat and Cryptofund (which didn’t have the best of endings, to say the least). As of now, the Waves platform will focus on the integration of the Waves client with “a” hardware wallet and the implementation of 2FA after smart contracts are released on the mainnet. We will see if this will have any positive effects on the future price of the platform’s token.

We strongly believe it is one of the most solid and consistent projects out there. The actual price is still way off and it would be a good idea to buy and go long on Waves in this bear market.