Home » Journal » Has the world forgotten about Ark (ARK)?
Journal

Has the world forgotten about Ark (ARK)?

Ark isn’t having the best of luck price-wise at the moment. The current prices are just a continuation of a general downtrend that the coin was in throughout the past month. After seeing its July highs peak at $1,67 USD/25273 satoshi, the price kept falling down before reaching todays levels. Right now you can purchase a single ARK for $0.885737 USD, which is a 0.29% jump from what it was worth 24 hours ago. The coin has recently dropped below $100 million when it comes to its market cap; the figure now sits at $92,503,301 USD, making ARK the 85th most valuable cryptocurrency in the world. 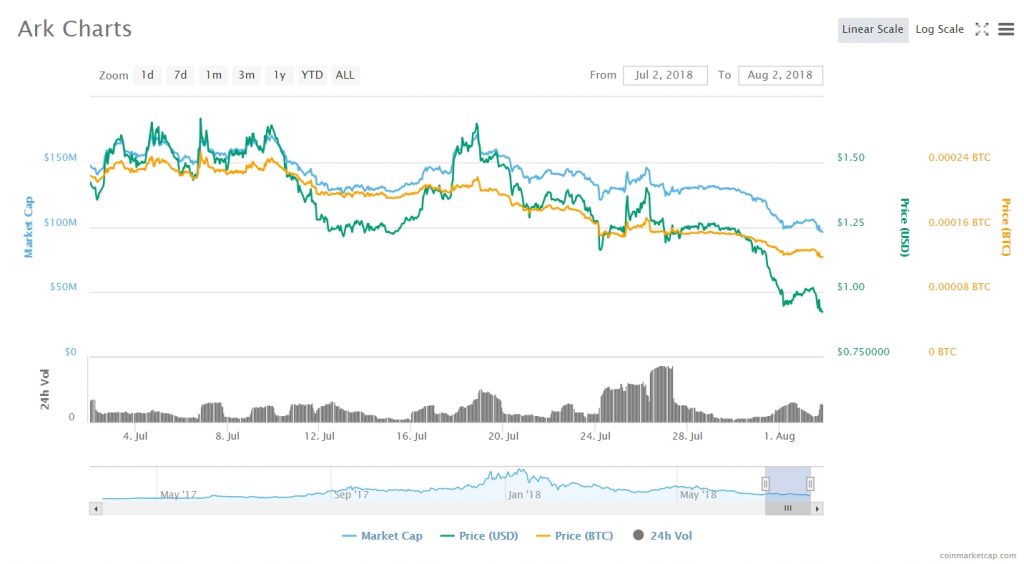 TradingView user fourday offers his TA insight on the currency:

“Beware catching falling knives and oddly drawn Elliot waves. However if we can see a BTC bounce any time, we should see ARK rise a bit, or stabilize as well.”

Right now, ARK development seems to be in full swing, with the project heavily invested in delivering new updates and hiring new staff members along the way. Besides looking to hire new community engagement managers, the team confirmed two new additions to their inner community: Gerard Blezer became the project’s new Finance and Compliance Manager while Carlie Wicklund landed the spot of ARK’s new Community Support Specialist. Meanwhile Matthew DC, Chief Strategist at ARK.io and one of the team’s recent additions, wrote a lengthy Medium post in which he explained his origins and what he can do to help ARK move forward.

The team has been mostly focused on the ARK ACES project, one meant to create and design ARK’s encoded listener. This project is meant to give users of the ARK network an ability to interact directly with the Ethereum blockchain, without the need to own Ethereum.

“ACES is an infrastructure for blockchain utility services such as transfers, contract deployments and executions, and utility consumption. ACES connects multiple blockchains together using a modular design. Our suite of tools allows you to connect ARK, Bitcoin, and Ethereum, including services for transfers and Ethereum contract deployment,” says their official material.

They recently released a blog update titled: “A Look Back at 2018 So Far: Are We Achieving Our Goals?” in which they addressed the seven objectives they set in front of themselves after the ACES service was originally deployed. The issues they deal with throughout this past period were:

In the described post they note that these issues have been dealt with and fixed in a way that they hope will encourage more users to participate in the ARK ecosystem. They followed this up with the release of ansible deployments for all ACES applications. This update improves the deployment experience for all ACES services, letting users launch a marketplace, service, and/or listener by simply cloning the repository, updating a config, and running a script for their desired app. Finally, ARK team released a blog post confirming that the ARK Docs, the project’s full documentation, has been moved from ReadMe.io to VuePress. While they cite self-hosting and removal of third party hosts as the main reason for the switch, they go into detail why the new hosting platform is a better option for them and the community.

The rest of the community seems to be pitching in in their own unique ways as well. Project’s GitHub bounty program for July 2018 was recently concluded, with GitHub user ItsANameToo winning the top prize of $2000 USD for developing the Swift Client. The bounty for August has been confirmed as well, and the prizes will remain the same ($2000 for the first place, $1500 for second and $1000 for third).

Meanwhile, Reddit user msdhere collected and released the coin’s stats for the year of 2018. Another Redditor, BroadcastJunkie, released ArkForIT, a paid service which provides end users with help, consultation, and guidance through the world of personal internet security. As a cherry on top, a group of community members on the ARK network (it uses a DPoS algorithm for transaction verification) announced their candidacy for the network delegator spot under the name “The Golden Horde”.

“Our delegation combines the best of Ark through forging rewards whilst giving something extra, the option and ability for our voters to get cryptocurrency and blockchain merchandise delivered to their door. We have now launched our delegation and are looking to get into the top 51 delegates to start forging,” said their official announcement.

All of these announcements and community engagement suggest that Ark may be a pretty undervalued project at the moment. Once the market (namely Bitcoin) starts recovering, we should expect Ark to do the same with an impressive force.