September has been a wild ride for bitcoin owners: the digital currency began the month nudging an all-time high of $5,000 before losing nearly 40% of its value in a spectacular crash. Bitcoin did it again: He fell, and he did it dramatically. In the meantime, its exchange price is moving below the USD 4,000 mark. The Bitcoin price thus fell back to levels last reached in September 2017. At that time, these prices were already a result of the short-term bear market induced by China.

This time, however, the situation is much more dramatic as a fundamental long-term support has been breached: 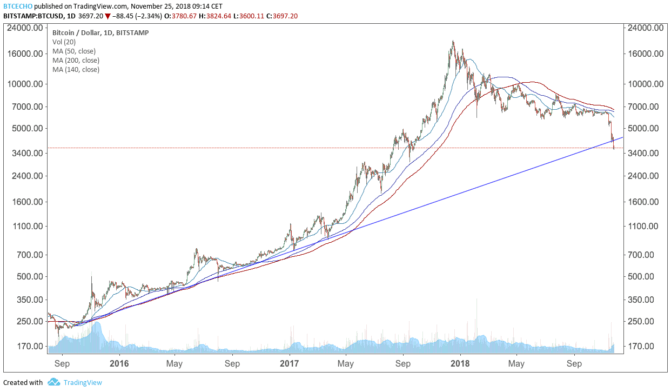 To emphasize the significance, once again in words: With the current dump a support valid since October 2015 was broken. Talking about the fact that these prices could not even have been dreamed of at the beginning of January 2017 would misjudge the drama of the current situation. We are in another level of the bear market.

But not only Bitcoin has fallen, the entire crypto market has crashed further. So far, so well known. But that XRP, Ripple’s crypto currency, which is increasingly decoupled from Bitcoin, shares this downward trend is new. While XRP could hold itself in the past weeks over the moving average value of the last 20 weeks, the current sell-off has brought also the XRP price again on the ground of the facts.

On the positive side, however, the price is still above the support level pursued since mid-2017, which currently stands at 0.32 US dollars.

Bitcoin on the descent – What’s the next step?

Where do we go from here? In the short to medium term, the already mentioned price levels of 3,500 US dollars, 3,000 US dollars and 2,500 US dollars can be observed as new supports. For the long-term investor, however, the question is how things could continue.

The vernacular says so nicely that history does not repeat itself, but it rhymes. So let’s take a look at Bitcoin’s price history. The last bear market was from 2014 to 2016. Can we learn anything from that? A look at the weekly chart of the Bitcoin price between 2011 and 2018 shows an interesting behaviour: 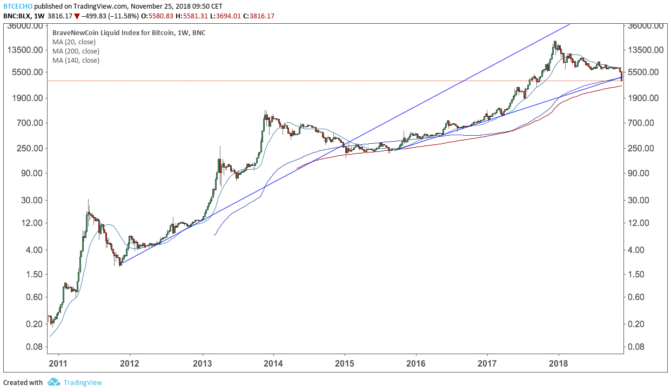 The rhyme story can be seen in the recent price fall and that of late 2014: In both cases the moving average of the last 140 weeks has been broken. At the same time, another important support broke, which had been in place for three years in both cases.

For the Bitcoin price, the end of the bear market had not come, but it moved at least above the moving average of the last 200 weeks. This proved to be a sufficiently strong support, so that the Bitcoin price moved sideways again afterwards.

BTC is currently trading below $3,760 – the support of the trendline connecting the August 2015 and August 2016 lows.

A close below that level would bolster the already bearish technical setup, as represented by the convincing move below the 200-week exponential moving average (EMA) support and the downward sloping 5- and 10-week EMAs.