Bitcoin isn’t like traditional currencies, and not just because it doesn’t exist as actual coins or paper banknotes.

However, there is a new startup in Singapore – Tangem which plans to create a new smart banknote platform. They have launched pilot sales of physical bitcoin notes at the Megafash Suntec City store in Singapore. 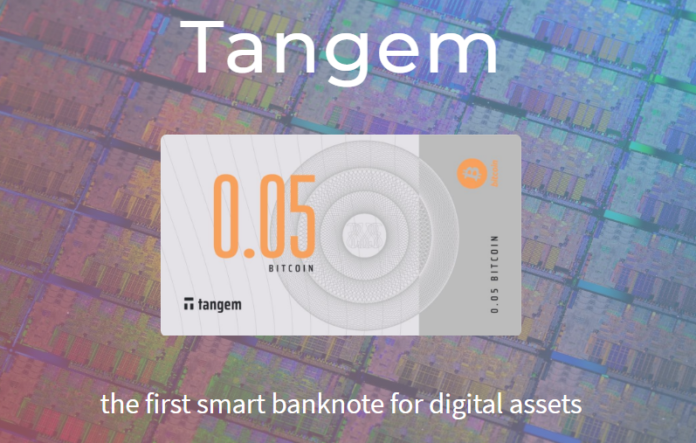 Tangem Notes are available immediately in denominations of 0.01 and 0.05 BTC and they will significantly improve the simplicity and security of buying, storing, and exchanging cryptocurrencies for both experienced and new users.

These notes are not really like banknotes made of paper; they are hardware storage units with a S3D350A chip manufactured by Samsung. The common trait with banknotes is that they represent one defined value and can be physically given as payment in a store. These notes are  basically self-contained wallets with their own private key. Tangem refers to them as “uncopiable cold wallet[s]”.

According to a Tangem post in Medium, the chip technology is tamper-proof, addressing “all known attack vectors on hardware and software levels.” It says that years of chip development via credit cards, SIM cards and ID cards have led to a product secure enough that “cost of hacking a single banknote [is] uneconomical”.

Tangem wants to be a kind of physical Bitcoin, similar to OpenDime, but instead of using a USD flash drive, Tangem uses ‘smart banknotes’. Tangem is thus the first real and tangible physical Bitcoin. “These bank notes will allow physical transactions, that is, for our daily expenses, similar to fiat money.”

However, it is not completely accurate that Tangem will be the first physical bitcoin, since the project has many predecessors, with Casascious being one of them.

In addition, the introduction of smart banknotes could lead more users around the world to accept and adopt digital currencies.

There are multiple applications where it could be used as loyalty cards, ticketing and gift cards.

Felix Kuester works as an analyst and content manager for Captainaltcoin and specializes in chart analysis and blockchain technology. He is also actively involved in the crypto community - both online as a central contact in the Facebook and Telegram channel of Captainaltcoin and offline as an interviewer he always maintains an ongoing interaction with startups, developers and visionaries. The physicist has couple of years of professional experience as project manager and technological consultant. Felix has for many years been enthusiastic not only about the technological dimension of crypto currencies, but also about the socio-economic vision behind them.