Home » Journal » Nouriel Roubini: “Now the desperate scammers from Tether/Bitfinex have gotten to use anti-semitic innuendos to cover their shady tracks.”
Journal

Nouriel Roubini: “Now the desperate scammers from Tether/Bitfinex have gotten to use anti-semitic innuendos to cover their shady tracks.”

Nouriel Roubini, a leading global expert on the shortcomings of the global economy, who has recently begun criticizing cryptocurrencies, has this time spoken about the Bitfinex scandal and associated stablecoin Tether. According to him, the largest crypto exchange has used anti-semitic innuendos and deliberately blamed the IMMO project, which is associated with the Rothschild family. The expert believes that Bitfinex linked the manipulations of the Tether course with the Rothschild’s IMMO “to cover their shady tracks.” In May, Roubini also accused Vitalik Buterin of anti-Semitism, after he initiated a discussion about the power of the Rothschilds regarding the IMMO project they were developing.

Recently an employee of the largest cryptocurrency exchange – Bitfinex, which is closely related to the USDT digital dollar, has shared insider information about the details of Bitcoin’s anomalous growth in connection with the strong Tether dump. The independent analyst, who prepared the report for Bitfinex, is confident that the massive sale of USDT was organized with the help of trading robots, which were most likely controlled by IMMO. It turned out that these bots were installed on hundreds of accounts connected to one network, since the transactions were carried out synchronously.

The news caused a heated discussion on Reddit, and also attracted the attention of the famous crypto critic – Bitfinex’ed: 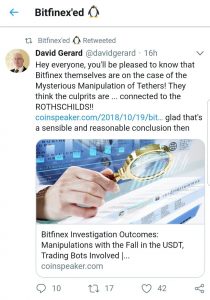 The article states that with the help of special services, Bitfinex analysts tracked the connection in blockchain transactions between the wallets suspected of organizing a price manipulation scheme. Funds to exchange accounts came from wallets that in a certain transaction were associated with a pair of ‘whale’ addresses. Balances were broken up into smaller parts specifically with the aim of not drawing attention to large sums. One of the ‘whale’ wallets was associated with IMMO, which, according to numerous rumors, are the Rothschilds.

IMMO – a reserve cryptocurrency with intrinsic value, has not yet made a single official statement. Although back in May, linking IMMO with the Rothschilds, Vitalik Buterin used his twitter account to initiate a discussion about the power of the oldest banker dynasty. Several experts including Tim Draper, Lon Wong, Jimmy Song and others are among those also discussing IMMO. Media resources claim that this month, the Rothschild project has entered the active phase: Evangelists of the High1000 community were seen at private meetings in Tokyo and other financial capitals of the world.

The author of the published article believes that since the IMMO project aims to create a reserve cryptocurrency, the Rothschilds have a strong motivation to clear a place in the market for their own global project. Tether occupies the very place as the “reserve” for the cryptocurrency market, with which traders are hedged during a sharp fall in all digital assets. Tether Limited, which is the issuer of Tether, has close ties with the largest leading exchange Bitfinex, and together they form a large and influential ecosystem. Apparently, the attack by IMMO was organized with the aim of shaking Tether’s influence in the market and preparing a place for its own project.

For several months, a flurry of criticism fell on Bitfinex and Tether from all sides, and it is possible that IMMO made the main contribution to the blow on Tether’s image. But at the same time, can we be sure that the attack on Tether’s course was really organized by the Rothschild’s IMMO? The theme of IMMO, and the links of this project with influential bankers, are hotly debated in the crypto community. Nouriel Roubini makes it clear that the messages that have appeared on behalf of an anonymous Bitfinex exchange employee are nothing more than a cleverly planned move by Bitfinex. The exchange uses conspiracy theories around IMMO to justify its own failures, as it is so simple to blame Jewish bankers, who are already considered to be “the culprits of all world crises.”

Journalist. 2 years working in a local newspaper in Karlsruhe, Germany. Now Rudolph is engaged in writing analytical articles for the cryptocurrency market. He creates an analysis of ICO-projects, conducts research, and does surveys on the crypto-market.